A few years ago that cowboy ankle boots, have opened an important place in the world of fashion. Last year they already managed to be one of the great protagonists, reaching the top thanks to the important push of celebrities and influencers. But this year, women’s cowboy ankle boots are still going one step further by getting fashion gurus to decide that Western fashion is not only going to be another trend and, during this 2019/2020 season, they have already decided that cowboy ankle boots They are going to be the star fall / winter footwear. So, definitely, this season the cowboy boots are here to stay. And a sample of this is the effort that great designers and brands […]

END_OF_DOCUMENT_TOKEN_TO_BE_REPLACED

The leather belt is one of the most essential accessories of our clothing and forms part of the origin of clothing since antiquity. The leather belt began to be used in the Neolithic period, and although initially it was used for purely practical reasons to adhere to clothing, over time its aesthetic character was reinforced. In some ancient civilizations the leather belt was loaded with symbolism and was fundamental: for the Romans it was a symbol of power, strength and dignity. And taking a leap in time, in the Far West a cowboy belt symbolized the integrity of the cowboy, his courage and his mettle. Throughout time, the belt has continued to be part of all costumes and styles. In […]

END_OF_DOCUMENT_TOKEN_TO_BE_REPLACED

Talking abou belt buckles irremediably suggests the classic and impressive cowboy buckles or, at best, in the spectacular friky buckles that Howard Wolowitz, the character played by Simon Helberg in the famous television series The Big Bang Theory, often wear. Although, the truth, the belt buckles of the latter are practically a thing of another world and, often, quite far from the classic designs of the characters of the Western movies or the typical rodeo cowboys. A few months ago, at the end of last year, we talked to you about the origin and history of the traditional cowboy belt buckles. If you remember, we also told you that if you are interested in the world of buckles, the best place to go […]

END_OF_DOCUMENT_TOKEN_TO_BE_REPLACED

Western boots are no longer the exclusive preserve of cowboy style lovers, but the ultimate cry in street style. And the western aesthetic is very fashionable, each one can create their own version of the trend. The combination of western boots with jeans always works, but now it goes further: they also wear them with dresses, and they are phenomenal. With western aesthetic pants are a plus and to highlight a garment of basic garments are a stroke of style. In addition, like all the accessories with personality, the cowboy boots you have to know how to wear them and that is an incentive. Whether it’s denim shirts or white shirts, message shirts or knit jumpers, cowboy boots are irresistible. […]

END_OF_DOCUMENT_TOKEN_TO_BE_REPLACED 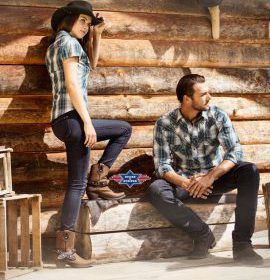 When we talk about timeless looks one of the first things that comes to mind is how practical they are: they do not go out of style. They are therefore a good investment as they are garments that we will take much advantage of.  Cowboy shirts are a good example of this, and they can not be missing in a self-respecting wardrobe. There are times when they walk stronger than others, but the truth is that cowboy shirts are always in fashion. Adaptable to all styles and above all, very flattering, cowboy shirts are a perfect piece that prevails to all trends. Following the same wake of the denim shirts, the Ranger’s shirts reconcile the western style with the denim fabric, resulting in a unique […]